Nicholas (Nick) Roberts was born with optic nerve hypoplasia, also known as ONH, a congenital eye condition in which the optic nerve is underdeveloped in one or both eyes. The 21-year-old from Boca Raton, Florida, has 20/800 vision in one eye, and only light perception in the other eye.

Optic nerve hypoplasia required Nick to use special large print books or braille, and a white cane to walk around. But Nick doesn’t allow ONH to affect his love for the Florida Panthers. 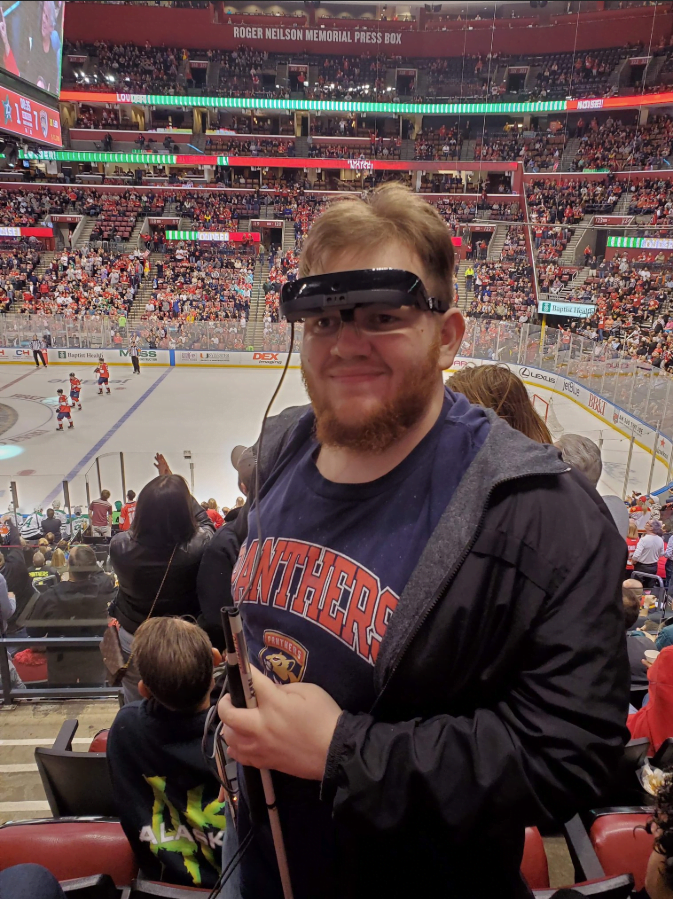 Nick became a fan of the Florida Panthers in 2006 when he attended his first live hockey game. He hasn’t missed a game since. However, due to his ONH, Nick couldn’t see the fine details of the game. Nick would sit directly in front of the TV to watch the games, or listen to the announcers on the NHL app.

“I like hearing the sounds of the skates on the ice,” says Nick.

Nick Keeps His Eye on the Puck

Nick tried eSight 3 on June 21, 2018. He experienced what it was like to have 20/20 vision for the first time in his life. He was able to relive family trips he previously couldn’t see using old photos and eSight 3. Nick knew he had to have the technology.

“I saw leaves on palm trees and read a business name on an awning. I could see people and animals in pictures and I could see faces,” shares Nick who finally experienced 20/20 vision after living his entire life with ONH.

The video of Nick’s demonstration was live-streamed on Facebook with more than 50 friends tuning in to see the emotional moment of when Nick saw his dad’s curly hair for the first time.

“I became emotional during the demo because I never thought I would be able to see the things that I did and never dreamed seeing 20/20 would ever be possible.”

Making a Breakaway with eSight

It only took one month for Nick to secure the funds to receive eSight 3 thanks to the generosity of his community and eSight’s fundraising platform, eMPOWER.

Now Nick uses his eSight 3 in read fine-print books required for his criminal justice studies program, read menus in restaurants, and of course watch his favourite hockey team, the Florida Panthers. Nick even started a YouTube channel, Tech of the Blind, where he shares hockey game recaps and eSight tutorials.

“eSight has made life easier in general,” shares Nick.

Did you enjoy Nick’s story? Learn about support and low vision aids for people living with optic nerve hypoplasia.